On the wagon
Back to News
Harlow based Rail Freight Services in the UK is unloading five trains of London clay a day with the help of a Volvo excavator equipped with bespoke rehandling equipment.

Northfleet in Kent is a town in the Borough of Gravesham in England. Its name is derived from its location on the northern reach of what was once called the River Fleet. It has been the site of a settlement on the shore of the River Thames since Roman times.

Specialized handling company, Rail Freight Services, has been contracted to manage a long term project unloading rail wagons carrying London Clay. The clay is well known for containing fossils from the Lower Eocene period – ranging from 33 to 65 million years ago and is stiff, bluish clay that turns brown when weathered. It’s used commercially for making bricks, tiles and coarse pottery.

The company based in Harlow, Essex, specializes in the loading and unloading of railway wagons and waterborne vessels, servicing clients operating within the rail and tide timetables with tight time constraints. All of its equipment is custom-built and designed for specific operations.

A Volvo Construction Equipment (Volvo CE) EC480D-Series excavator has been supplied to Rail Freight Services with bespoke rehandling equipment modified, designed and engineered by Kocurek of Ipswich –– the creator of bespoke excavators, built especially for the company’s high reaching and transportation tasks. It has been tailored and supplied as part of a team of similar specified machines unloading up to five trains a day at a dedicated terminus located at the side of the River Thames at Northfleet.

The machine has been equipped with a 7.0m boom, a specially adapted dipper arm complete with under-slung cylinders, a 2.5 m3 Vantec rehandling grab complete with ejector bars and full rotation, and an additional 9750kg counterweight. To provide the operator with full visibility when unloading the rail wagons, the machine also benefits from a hydraulic high rise cab with a lift height of 2 meters.

At the heart of the machine is a Stage IIIB V-Act 13 liter engine that reaches 348 nett hp and is ideally matched to its automatic sensing mode hydraulic system. The machine features an automatic idling system that reduces engine speed when the levers and pedals are not activated – aiding fuel efficiency and lowering external noise. When a single function is being used, the two pump hydraulics system combines the flow of both pumps for quick cycle times and greater productivity. It can also prioritize flow according to the work being done – such as flow to the boom for faster raising when loading or to the arm during levelling or swing during large slewing angles.

“We have a long experience operating Volvo products which have given us a high degree of reliability and longevity, so when we decided to purchase the right machine for this particular project, choosing the EC480D including the service support and backup we can rely on from Volvo made perfect sense,” says Business Manager Jim Flatman at Rail Freight Services.

The machine has been supplied with a blue service agreement and joins 12 other Volvo excavators and loading shovels in the company’s fleet. In total the company owns a fleet of 50 units consisting of materials handlers and wheeled loaders. 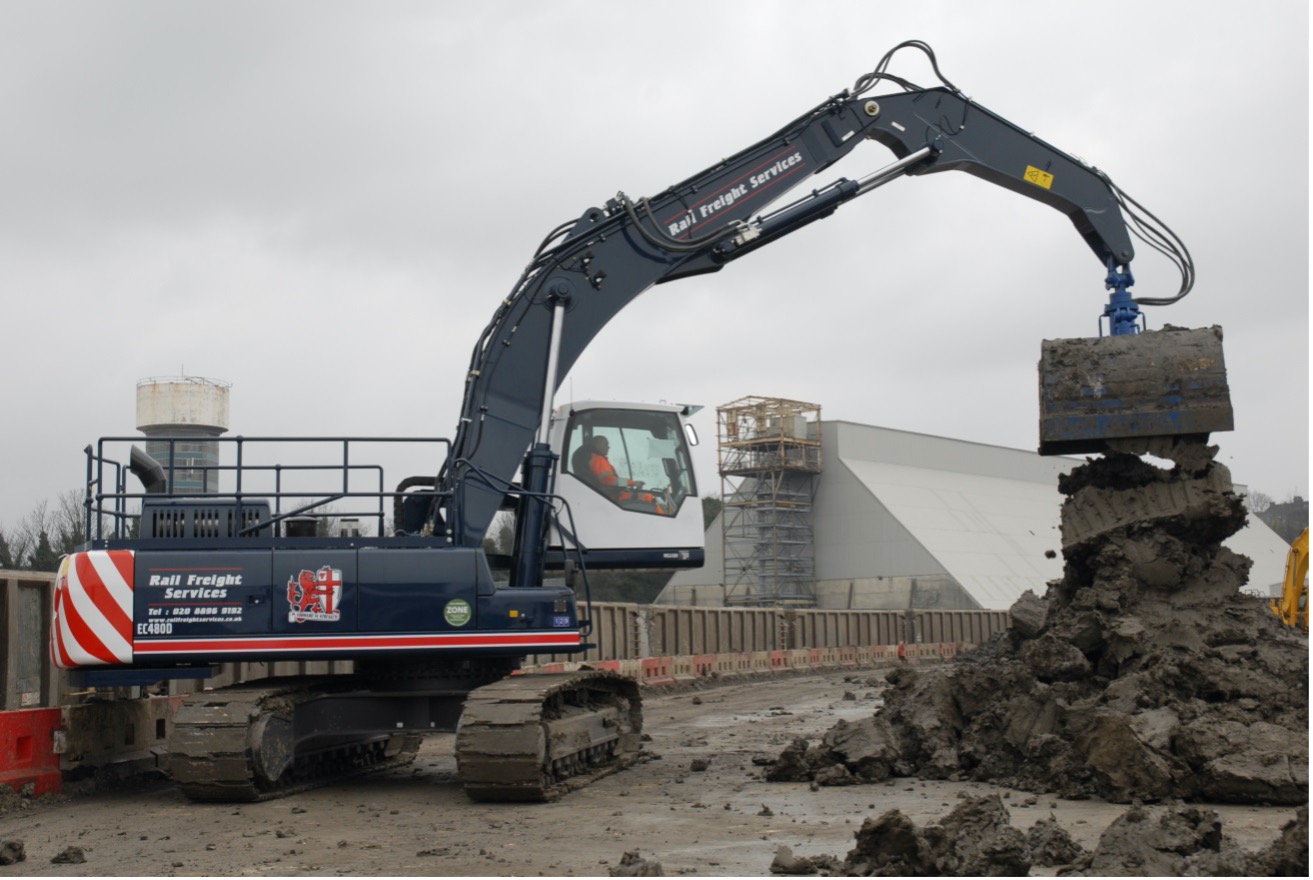