Hanson restore rail link to Ashton-in-Makerfield
Back to News
Restoration of railway siding set to remove 1,500 truck journeys of the road each year

HANSON have invested £250,000 in restoring the railway siding at their plant in Ashton-in-Makerfield, in Greater Manchester, allowing rail freight to be delivered to the depot for the first time in around 10 years and taking hundreds of lorry journeys off the roads each year.

Working in partnership with GB Railfreight, Hanson will run three trains a week from their quarry in Shap, Cumbria, down to the site in Ashton. It is expected that more than 200,000 tonnes of material will be taken by rail each year along this new route, which saw its first service run on 15 October.

Hanson UK’s regional general manager for the north, Simon Day, said: ‘The investment in the site is an important part of our rail strategy. We are working to try to increase the tonnage of aggregates we transport this way across the UK.

‘These three trains a week will take around 1,500 truck journeys off the road each year and mean that we only need to put the material on to road transport for the last 5–10 miles, rather than the 60–80 miles we do now. This will reduce the distances travelled on the road by our truck fleet by around 500,000 miles per year.’

GB Railfreight’s managing director, John Smith, said: ‘We are delighted to be partnering with Hanson on this new service, which will be using one of GB Railfreight’s recently purchased Class 60 locomotives. This partnership is further demonstration of the role freight can play in taking trucks off the road and reducing emissions.’

The material delivered to Ashton-in-Makerfield will be used by Hanson’s asphalt and concrete plants, as well as supplying the construction market in the north-west of England. In addition to refurbishing the rail track serving the site, money is being spent on upgrading the depot, including the installation of a new weighbridge and office facilities. 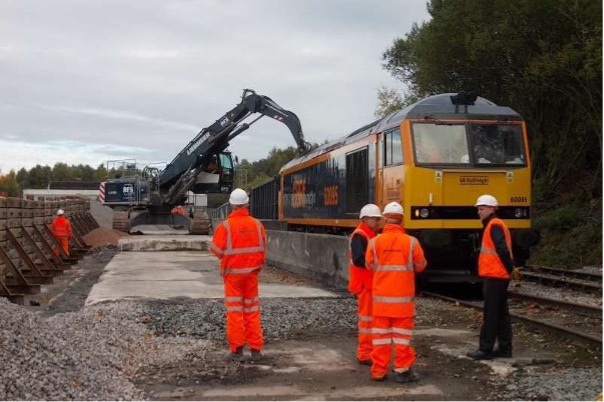